Four days of non-stop field hockey came to an end with two exciting finals in front of a capacity crowd in the beautiful setting of Moorpark College on Memorial Day at the 48th California Cup. Sacrament Kings defeated HFS Adidas 2-1in a very close Men’s Super Division encounter for the $7,500 prize money while Team Osaka from Canada edged local favorites, Jolie Pitts with the same score to earn their money in the Women’s Super Division thanks to the two goals by their captain Stephanie de Groof, a Belgian Olympian.

Nederland’s Tristan Algera gave the Kings a 1-0 lead in the 3rd Quarter and captain Tom Carson, English international and one of four Carson brothers playing for the Kings, made it 2-0 for the team from Northern California in the 4th Quarter. Another English international, Ed Horler got one goal back for HFS Adidas with his tournament leading tenth tally of the championship to make it 2-1, but, he was unable to do any further damage in a very exciting finish.

Horler was easily the most exciting player in the men’s group and earned Ross Rutledge Award for leading the entire tournament in scoring. In the semifinal, on Saturday, Horler’s back to back goals, two minutes apart, helped HFS Adidas edge Osaka Diamonds, a Canadian club loaded with Canadian internationals, 3-2. The other semifinal saw the Kings destroy the Bulldogs 7-1 with three of the four Carson brothers getting into the act. George, Tom and James gave the Kings a 3-0 lead scoring in the 6th, 12th and 14th minutes. James added his second goal in the 34th minute. Tristan Algera, Barkat Singh and Amrinderpal Singh were the other scorers for the Kings. 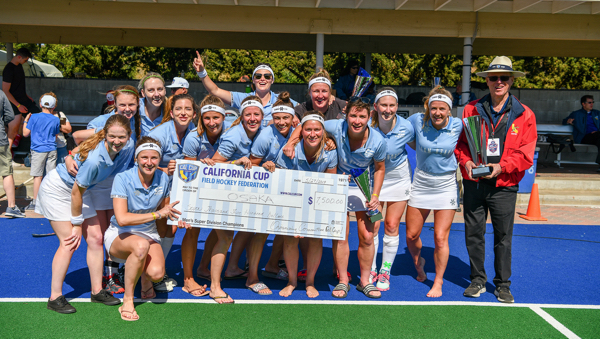 In the Women’s Super Division semifinals, Team Osaka easily defeated the Olympic Club 4-2 on the strength of a hat trick by the Australian Olympian Kathryn Slattery. Slattery was tournament’s second highest scorer with 9 goals. In the other semifinal, Jolie Pitts beat Northeast 3